Of historical interest to The Old Guard – Many of you know the origin of our name in 1893 was to follow the example of the Napoleonic Old Guard – The oldest, most experienced and best of Napoleon’s troops were selected to be his personal bodyguards, off the battlefield and on the battlefield, especially at the end of his military career.

I recently acquired a group of French Old Guard items from the Waterloo period (1815) and shortly thereafter. The display include an Old Guard/Honor Guard officer’s belt buckle, three related buttons and two Napoleon medallions. I removed and polished the buckle and two of the buttons as you will see below. 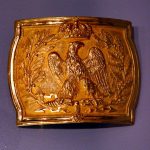 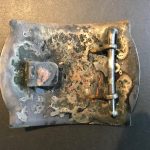 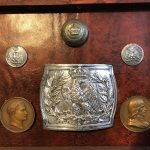 General Staff of the Imperial Guard

Created soon after the creation of the Imperial Guard itself (Napoleon’s personal bodyguards, including The Old Guard, Medium Guard, and New Guard), the General Staff by 1806 included the four Colonel-Generals of the four divisions of the Guard, all Marshals of France in field rank. It also included an Inspector of Reviews, a Commissioner of War, 24 aides-de-camp, and other specialist officers, NCOs, and privates.

The Old Guard was disbanded by the victorious Sixth Coalition in 1814, along with the rest of the Imperial Guard.

Napoleon saying goodbye to the Old Guard at the Palace of Fontainebleau, after his first abdication (1814) 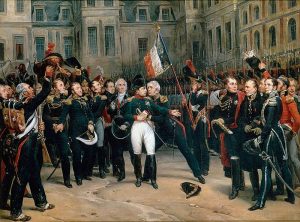 During Napoleon’s 1815 return from exile, the Old Guard was reformed, and fought at the Battle of Waterloo, where the 2e Regiment de Grenadiers-à-Pied was pivotal in the defense of the village of Plancenoit against the Prussians.[5] The 1er Regiment, charged with protecting the field position around Napoleon himself, served as a rear guard after the failure of the attack of the Middle Guard on the British center.[6] The Old Guard cavalry was involved in the unsuccessful midday charges against the British infantry, and was unavailable at the battle’s decisive moments.

Best to all, stay safe,