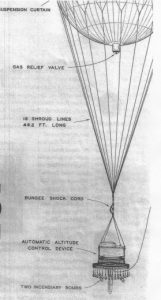 This month’s history talk was presented by Col. Henry Taylor. Henry was kind enough to share some of his background information from the May 2020 editions of Military Officer and the Air & Space Magazine describing how the Japanese used the jet stream to send bombs to the north east US.

In 1944–1945, during World War II, Japan launched some 9,300 Fu-Go balloon bombs at North America. The 10-meter (33 ft) diameter balloons were inflated with hydrogen and typically carried one 15 kilograms (33 lb) bomb, or one 12 kilograms (26 lb) bomb along with four 5 kilograms (11 lb) bombs. The Fu-Go utilized the 220 miles per hour (350 km/h) winter jet stream to cross 5,000 miles (8,000 km) of the Pacific Ocean in approximately three days. To control altitude, the balloon used a barometric sensor that would release ballast sand-bags when the balloon went below 30,000 feet (9,100 m). When the sensor registered an altitude of above 38,000 feet (12,000 m), hydrogen was vented from the balloon. The whole mechanism was activated 52 minutes after launch to allow the balloon to reach initial altitude. The final sandbag stations were fitted with incendiary bombs which were released by the same mechanism, and after the last release the balloon activated a self-destruct mechanism and released an additional bomb. 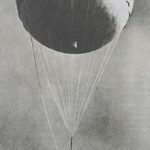 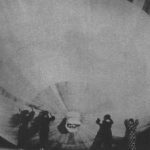 To read more, check out these links: