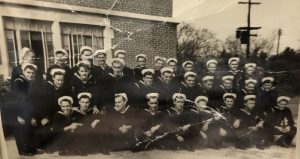 Jim was born on July 14, 1925, in East Point, GA to Dr. George Cunningham Christian and Martha Reese Jarrett. A graduate of Russell High School, he graduated from Mercer University and the Southern School of Pharmacy (now Mercer). His college education was interupted by WWII, where he served in the Pacific Theater in various medical roles including identifying downed flyers in Japan. He rounded out his military service retiring from the Georgia State Defense Force at the age of 80.

A licensed Pharmacist, he joined CIBA Geigy Pharmaceuticals in 19 55 where he was the company’s first governmental affairs managers in the Southeast. Retiring after 33 years, he enjoyed genealogy and traveling to the Isle of Man, the ancestral home of the Christian family.

His wife, Josephine Wilson Christian preceded him in death – they were married 55 years. Jim and Josephine had two daughters, Charlotte and Caroline (West Hollywood, CA).