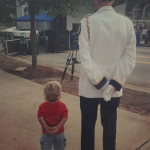 James, (Jim to those who knew him well) was called to Heaven on September 14, 2018. He was born in Marietta in 1933 and spent most of his life here in the area until his death at the age of 85. He graduated from Robert L. Osborne High School in Marietta continuing his higher education at Embry Riddle Technical Institute in Daytona Beach, Florida where he later graduated with a technical degree in airframes and power plants. He spent a number of years in the aircraft industry, later transitioned into the automotive industry where he hired on with Chrysler Corporation in 1965, building a career spanning more than 40 years in multiple positions on the corporate ladder.

His personal interests included his first love, which was always aircraft. Through the years he logged thousands of hours as a private pilot, fueling his passion for flight. Throughout his life he maintained his love for the outdoors, including his love for hunting and shooting. This love for the outdoors led him and his two sons to the Scouting program, both of which earned the rank of Eagle Scout through his care and guidance.

He is survived by his loving wife JoAnn, his oldest son Ray, youngest son Greg, grandchildren Jordan, Carson and special niece Donna. He is known to his friends as fun, kind, knowledgeable and generous with his time, spending much of it devoted to his family and faith in his dedication and service to Mt.Bethel United Methodist Church. He was known to his family as a great father, an incredible leader and a most loving husband. He lived a very full life by anyone’s standards and his loss will certainly be felt amongst those who knew him best.