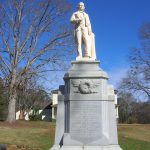 Alexander H. Stephens was born on February 11, 1812, here in Crawfordville, Georgia. He became known as “The Great Commoner” by the end of his life, having given almost 50 years of service to his home state of Georgia and the Southern Cause as the Vice-President of the Confederate States of America. It is a testament to his recognition in both the North and South that his statue stands today in the rotunda of the Capitol in Washington, D.C. It was placed there in 1927, with the Old Guard as the military honor guard.

My time is brief on this podium, and so I will not give a full accounting of his life and accomplishments. Worthy of mention, though, are the fact that he was an early champion of the Iron Horse – the rail roads – in beginning to develop the vast continent of North America. He fully supported the development of the Western & Atlantic Rail Road in Georgia, which was instrumental in the naming of Atlanta as The Gate City to all states north and south. He was a zealous supporter of women’s education, long before it was popular to do so, and largely responsible for the charter for the Georgia Female College in Macon, later Wesleyan, which became the first institute in the world to confer a college degree to a woman.

Also, in the run-up to the War Between the States, he argued strongly against War in several great speeches presented in 1860 and 1861, proposing that a compromise be found to the dilemma of slavery short of splitting the Union. He foresaw the disaster that War would bring to the South, and he also foresaw the further destruction that what became known as Reconstruction would cause afterward. Nevertheless, like Robert E. Lee, once the decision had been made to secede, he placed his loyalty with his home state and the Southern Cause. Due to his high political reputation, he was offered, and assumed, the Vice-Presidency of the CSA.

A little known fact is that in 1861 he argued forcefully that the Confederate government should purchase the entire output of cotton from the Southern States and deal directly with the European powers for that commodity, in particular Britain, whose looms depended on the regular supply of Southern cotton. In this way the CSA government could have demanded recognition from these European powers, and likely gotten naval escorts for their cotton ships early in the War. However, other voices in the government dithered, and the Anaconda Plan and blockade of Southern ports became effective before such a plan could be implemented.

Having served in the House of Representatives for 16 years before the War, and another 10 years after, he was elected governor of Georgia and assumed office in 1883. Sadly, within three months he contracted an illness and died in office in Atlanta. At his side was his aide, CPT Joseph Burke, a leader within the Atlanta Gate City Guard, and later the founder and Commandant of the Old Guard. According to the Atlanta Constitution, between 60 and 100,000 people turned out for his funeral procession, from the Capitol to Oakland Cemetery on March 8, 1883. Many military organizations accompanied his casket on this journey, including the Gate City Guard, the Augusta Clinch Rifles, the Savannah Oglethorpe Light Infantry, the Savannah Chatham Artillery, and over 20 other such organizations from across the state. Governor Stephens’ body rested in the Burke family mausoleum at Oakland Cemetery for a year while preparations were made here at Liberty Hall for his final resting place, where he was interred the following year.

On May 24, 1893, the statue you see here of Stephens was unveiled, and attended by the Gate City Guard and The Old Guard, in the first year of our existence, 1893.

On October 18, 1913, this granite tablet was placed over his grave by The Old Guard. COL Burke spoke at that unveiling, wearing the very Emblem of the Commandant of The Old Guard you see I am wearing today. What an honor it is for me to be here, following in this tradition of now over 100 years. I will close with the following comment made in the Atlanta Constitution the following the ceremony in 1913:

“As their old Battle Flag of 1861 flapped over them, the Old Guardsmen stood around the covered marble tablet. COL Burke drew back the white veil from the tablet, while a file of soldiers fired three volleys across the grave. And a little lad in cadet grey, Frank Meadows Jr., bugler for Marist College in Atlanta, sounded “taps”.”