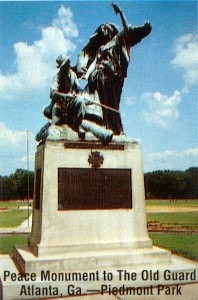 August 25, 1910 witnessed a meeting for the purpose of hearing reports concerning the preparations for erecting an Old Guard Peace Monument in Piedmont Park some time in 1911.

The first meeting of the committee was at the residence of Colonel Burke, where the soul of the movement was quickened into life. Colonel Burke was dispatched to see our old friends throughout the North and East, and invite them to visit Atlanta at the unveiling. He made four visits to New York and other places, conferring with sculptors and bronze founders, and the work went on apace. The monument committee received the enthusiastic support of the citizens and the Chamber of commerce, with the result that the monument now stands as a lasting tribute to the conception and realization of a lofty ideal which will reflect honor upon our organization long after its present membership has passed away.

Then followed the dedication of our Peace Monument on October 10, 1911, which was one of the momentous events in the history of Atlanta, and marked a distinct epoch in the life of the Old Guard. It was a realization of a long cherished dream of that brilliant leader, Colonel Joseph F. Burke, and the culmination of concerted effort on the part of a devoted band, whose names are now inscribed in imperishable granite on the monument. This dedication brought the Old Guard into instant fame throughout the country, and especially in the North and East, who were so splededly represented on this occassion-Richmond, Washingot, Baltimore, Philadelphia, New York, Hartford, New Haven and Boston sending special trains, instead of special cars, to transport the troops and bands to Atlanta. The splended uniforms and martial music encountered everywhere thrilled the assembled multitudes, and proved beyond all doubt the influence and prestige wielded by the Old Guard.

At the first anniversary of the unveiling of the Peace Monument, the Old Guard members who had provided themselves with a handsome new uniform, gave a grand reception at the Auditorium on October 10, 1912, which was attended by the Governor and his staff and all the elite of the city, and was the occasion of much congratulation for the manner in which it was conducted.

In Atlanta, a “Peace Mission” to the Northern states was proposed.  Captain J. F. Burke, Commandant of the reactivated Gate City Guard, led the movement.  The Guard had been the first military company in Atlanta to volunteer for the war; now it would be the first to volunteer to secure the peace.To the surprise of some, the Atlantans found a hearty welcome for their “peaceful invasion” of the North.  Thousands turned out in major cities to cheer the “best drilled company in the world”.  The national press followed the Guard’s friendship tour closely and it became known to people all over the country.  Its mission was pronounced a great success everywhere and described as the first real move to reunite the states.

Many more visits between North and South were exchanged over the next decades, including Atlanta’s famous Cotton States Exposition of 1895.  by 1910 it was decided that a monument to the first “Northern Mission” should be erected in Atlanta.  The cost of the monument was quickly raised through private subscription.  On October 10, 1911, 75,000 people watched a splendid parade of military units from all over America participate in dedication ceremonies which concluded with the presentation of the monument to the City of Atlanta.Newspaper accounts of the day confirm that the Peace Monument represented different things to different people:  Patriotism, reconciliation, the pledge of friendship and good will, and optimism about America’s unfinished history were all sponsors.  There is much historical evidence to suggest that it also represented a tribute to a proud people, who, even though defeated, still remained unconquered.

Each year Old Guard of the Gate City Guard conducts a brief re-dedication observance at the monument at 2:00 p.m. on the Saturday nearest October 10th.  The public is invited to attend.