The Old Guard of the Gate City Guard of Atlanta is sponsoring this raffle, and 100% of raffle proceeds will support restoration of both the McPherson and Walker Monuments. These Monuments are located in East Atlanta, near the actual spots where these Generals were killed during the Battle of Atlanta on July 22, 1864. Detailed plans for the restoration are complete and in print, and over half the funds required to accomplish this project have already been raised.

Raffle tickets are limited to 500 at $10/each – the $5,000 raffle proceeds will be matched by the Francis & Beverly DuBose Jr. Family Fund, thus providing a total of $10,000 towards this project. Two winners will be selected by blind drawing – the 1rst winner will get their choice of the prints, the 2nd winner will get the other. We appreciate your support of this worthy cause.

Nathan Bedford Forrest is considered by many to have been the finest cavalry officer on either side during the War, North or South. With no formal military training, he was a natural leader and rose from Private to Lieutenant General in the Confederate Army. On March 5th of 1863, following the Battle of Stone’s River, four miles from Spring Hill and near Thompson’s Station, TN, Union forces under COL John Coburn clashed with Confederate Brig. Gen. Earl Van Dorn. Forrest first drove the Federal artillery from the field, then cut off the Federal infantry’s line of retreat. Attempting to break through, the Northern cavalry charged Forrest – who then charged back in a counter attack. When his mount was shot from under him, he scrambled to his feet and led the charge on foot. The Union forces scattered or were captured. Forrest’s aggressive leadership was a key part of the Confederate victory that day – 300 lost for the South to over 1,900 lost for the North. 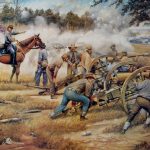 The Battle of Fredericksburg, VA, was fought December 11-15, 1862, and with almost 187,000 combatants from both sides engaged, was the largest single battle fought during the Civil War. With ~12,650 Union casualties and ~5,300 Confederate casualties, it was a major Confederate victory. This victory was due in large part to the effective use of artillery from the heights above the city, where the Confederates were strongly entrenched. Prospect Hill anchored the far right flank of the Confederate lines, held by “Stonewall” Jackson’s Second Corps and J.E.B. Stuart’s Cavalry Division. Maj. Gen. George Mead’s Division of some 4,500 attacked Jackson’s lines, but heavy and direct fire from five batteries located on Prospect Hill stalled the attack some 600 yards from the Confederate lines. A letter by a Confederate soldier present described a memorable image – “…Pegram’s men (a Virginia battery stationed by our side on the right) had left their guns (during this lull in the fighting). Capt. Pegram wrapped his battle flag around him, walking up and down among his deserted guns.” And Lee made one of his most famous statements of the War to Longstreet as he observed the carnage before him. “It is well that war is so terrible, or we should grow too fond of it.”