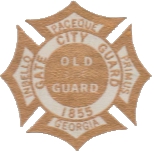 ORGANIZED in 1854 and chartered in 1857 as part of the militia of the State of Georgia to preserve order within the State.

MUSTERED into service of the Confederate States of America to repel invasion.

PLEDGED to commemorate and preserve the virtues o the Old South, to pass on to posterity the heritage of her chivalry, and to perpetuate an appreciation of her traditions and ideals.

ALERT for service in new issues and ever conscious to the aims of peace with honor.

The Gate City Guard was first organized on the 8th of January, 1857 at Atlanta, Georgia, and was named after the City of Atlanta, which bore the cognomen – “Gate City.”

The first place of meeting was in a room over a bank building, located on the cornor of what is now Wall and Peachtree Streets, then belonging to the Georgia Railroad and Banking Company.

The membership was representative of the best element of Atlanta’s citizenship. The uniform of the company was a remarkably brilliant one, being dark blue, with dark epaulets and trimmings, edged with gold. The hat was a black French shako, with drooping white plume. The service uniform was grey. The company, even in those antebellum times, were well drilled, and noted for their proficiency in the manual of arms and company movements, and were the favorite corps of gala festivities.

On all occasions when necessary, the company was called on by the authorities. When John Cobb was hanged during July, 1859, and it was rumored that his friends would make an attempt to rescue him from the sheriff, the company was called on to act as a guard to the sheriff; and again in November of the same year, when ten or twelve stores on Whitehall and Alabama Streets were destroyed by fire, Capt. Thompson called out the company to assist the city authorities in preserving order and guarding the property of the merchants saved from their burning stores.