Shared by COL Dietrichs – Updated with an excerpt from an article detailing the arrival of our captured flag in Ft. Wayne Indiana in 1861 (bottom of post).

I spent a good part of yesterday at the Atlanta History Center with Gordon Jones and the most knowledgeable man now living, Greg Biggs,  on Confederate flags. Greg spoke to the Atlanta Civil War Round Table a couple of months ago, and I mentioned our flag to him – he was very excited when I offered him the opportunity to observe and photograph it as he knew of its existence, but never seen it. 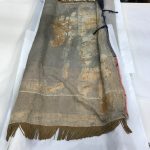 reg & I very carefully took it out, inspected, photographed and measured it for the first time since about 2010. As Old Guard Historian, I will have a more detailed report on this priceless artifact within the next week or so, but I am including only 3 of the photographs here for you, MAJ Marlowe, to post and send out to the Command, and one more important piece of information – Gordon, Greg & I all agreed for a number of reasons, it makes good sense to essentially leave the flag as it is and mount it securely and archivally in frame and under glass. This will offer the most reasonable cost and guarantee its availability for display when needed in the foreseeable future. Also, Gregg has compiled all information available to him on the flag & its history. This flag was made by the ladies of Atlanta and given to the GCG upon going to War in 1861, whereupon it was captured after the Battle of Corrick’s Ford in what is now West Virginia, thence returned c. 1900 to the Old Guard by the Governor of Georgia. I will include all information available on our flags’ history later in my more complete report. 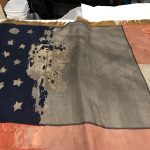 I would of course recommend we discuss this within the Command once Gordon can get an estimate on the cost for the recommended course of action here. I am sure, also, that the Gate City Guard will be interested in this, too. For the record, this flag does belong legally to the Old Guard.

On Aug 7, 2020, at 5:59 PM, John Dietrichs <jdietrichs@SAFTECHCONSULTINGINC.COM> wrote:
Commandant Farmer – Thought you would like to see this rather excellent discovery by our friend Greg Biggs. Article detailing the arrival of our captured flag in Ft. Wayne, Indiana in 1861. I have transcribed the article below:Ft. Wayne, Indiana Weekly Sentinel Newspaper, Sept. 10, 1861A TrophyThere is now at the P.F.W. & C. baggage room at the depot, a secession flag, which was captured at Garritt’s Ford by Orderly Sergeant P.W. Disbrow, of the 14th Ohio Regiment. It is an elegant silk banner, evidently transformed from a loyal American flag to the base design of the rebel standard. It is made wholly of silk, consisting of two broad red stripes, with a white stripe of similar width between, and having a blue field of the usual size of an American flag, with a shield in the centre and surrounded by 34 stars, all of which were more or less perfectly erased excepting seven, which showed that efforts had been made to destroy its original design. Upon the shield on one side is inscribed in gilt letters, “Gate City Guards, from the ladies of Atlanta, 1861,” and on the reverse the motto of the State, “In hoc signovinces.”! The whole flag is surrounded by heavy gilt fringe, and is mounted upon a splendid staff with gilt cord and tassels and other rich fittings.The flag has been sent to the charge of the brother of the captor, of the P.F.W. & C. R.R., who will leave it at the depot until tomorrow afternoon, to give our citizens, who are desirous of seeing a real, genuine secession flag, an opportunity of satisfying their curiosity. It is an elegant affair, and was doubtless valued highly by the company from which it was captured.The picture attached is of our flag, as at the Atlanta History Center, and described in the article. It may be that additional stars were added after the full 13 states seceded at a later date. Possibly(?) after its return.COL John A. Dietrichs
1st Georgia Ramseys Gate City Guards FTW Weekly Sentinel