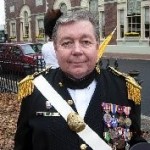 Cordially invites you to join in the celebration of

PRESENTED IN CONJUNCTION WITH

TO BE FOLLOWED BY A

MARCH DOWN BROADWAY
TO BOWLING GREEN

There used to be a holiday in November called Evacuation Day. This was the day in 1783 that the British troops finally left these shores.

Most people think of July 4th, Independence Day as the day we were free of the Brits but in fact the war ended in 1783 on November 25th. There are some interesting stories around what happened that day and I have attached a link to a booklet printed a hundred years later in 1883 describing one of those events, when we were still celebrating that day as Evacuation Day. In 1916 when we were firmly established as allies of Britain it was decided to drop the celebration of Evacuation Day for fear of offending the Brits, now our allies. Over the years several historical groups would hold occasional events in honor of Evacuation Day.

In 1790 a group of New York Veterans of Washington’s Continental Army decided to form a militia group to defend NYC in the event that the Brits tried to return. This group, The Veteran Corps of Artillery-State of New York, was founded at the City Arms Tavern at Broadway and Thames Street on November 25, 1790 (a plaque has been installed on the building that now stands there commemorating that event). In 1791 the VCA was officially recognized as part of the organized militia by the State of New York. The following year the Corps was recognized by Federal Law-which is still in effect. In 1809 the VCA was equipped with cannons by the State of New York. The VCA is one of nine historic military commands recognized by the National Defense Act, is the oldest active military unit in the State of New York and serves as the honor guard to the Governor.

This year, on November 25, 2015 the Veteran Corps of Artillery will celebrate its 225th Anniversary and Evacuation Day in conjunction with the Lower Manhattan Historical Society, with a ceremony that will begin in St. Paul’s Chapel at Broadway and Fulton Street. All are invited to join us.

As it stands now we will gather at St. Paul’s Chapel at 1100. At the moment our speakers, all expert military historians, are COL Joseph Davidson Commander of Fort Hamilton, John W. Conlin, a Sandhurst graduate and former Commander of the 6th Gurkha’s RGT. in Borneo, Ambassador John L. Loeb, Jr., former Ambassador to Denmark under President Ronald Regan, who will read the letter that George Washington presented to the Hebrew Congregation in Newport, R.I. and James Kaplan, President of the Lower Manhattan Historical Society the Co-sponsor of the event.

After a flag blessing ceremony and the presentations in St. Paul’s Chapel we will march the few blocks down to Bowling Green where we will raise the US Colonial flag and, for the first time ever, raise the VCA flag on the second flag pole.

For your information below is a link for a copy of a booklet written in 1883 describing Evacuation Day. I think you will find the booklet an interesting read.