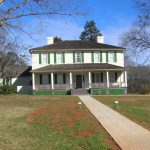 The Gate City Guard of Atlanta was Chartered by Governor Joe Brown in 1858 as the first Militia group to be formed in the City. Atlanta had grown very quickly in the previous 10 years, as the rail system blossomed and gave us our moniker as “The Gate City of The South”. The Police and Volunteer Fire Department had not kept pace, and an armed militia was deemed necessary by the City fathers to assist in times of peril, from natural disaster or any civic disturbance. When War broke out, some 75 members of the Gate City Guard immediately volunteered, and served with distinction during the four years of the War.

At the end of Reconstruction, around 1877, the Guard reformed as a militia once again, and their Commandant, Captain Joseph Burke, made a decision to launch a “Friendly Invasion of the North” in 1879, traveling by rail to many Northern state Capitols and major cities, marching in uniform and celebrating the “End of Hostilities” and re-unification of the country, North and South. With peaceful military precision and dress, and warm words for their northern brethren, Captain Burke and his men captured the hearts of those who saw and heard them during this journey. It was considered by the northern press and former Union officers and soldiers as a gallant and successful effort to help heal the wounds inflicted by the recent War and Reconstruction. The Confederate War Veterans had reached out the hand of friendship and reconciliation to the North, and came back to Atlanta to help build the New South.

By 1893, these former veterans were too old to continue as active members of a militia, and so Captain, now Colonel, Burke formed The Old Guard of the Gate City Guard. This was the formation of the group that continues today, but are now composed of individuals who may be direct descendants of Confederate veterans, or who have served in the US military or National Guard, or who have an abiding interest in the history of Southern and American history. 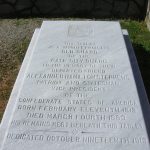 But how is The Old Guard connected with Alexander H. Stephens? After the War, Stephens returned to American politics, and in 1883 was elected as the Governor of Georgia. One of his key aides as he took office was none other than Captain Joseph Burke, of the Gate City Guard. When Stephens unexpectedly died only three months into his term, Burke offered his own family vault in Oakland Cemetery, Atlanta, as a temporary rest for his remains until a proper monument to his memory could be planned and a grave site prepared in Crawfordville, Georgia, Liberty Hall, his family home. He was there interred in 1884.

In 1893, the first year of our existence as The Old Guard, Stephens’ marble statue was unveiled next to his grave in front of Liberty Hall, attended by both the Gate City Guard and our Old Guard. On October 18, 1913, a granite tablet commissioned by the Old Guard was placed over his grave. Col Burke presided and spoke at that ceremony. It is now a requirement of our Constitution and By-Laws that we commemorate each year this ceremony in Stephens birth month of February, and celebrate the service he gave to America, and briefly the Confederacy, and then again to America and Georgia. His story is long and full of honor and commitment, and we keep it in our hearts and memory.